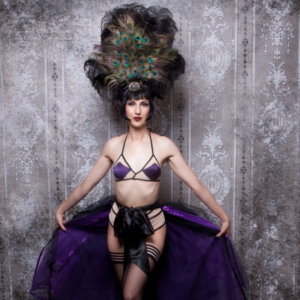 A’dora is the current owner/ Executive Producer of the worldwide Mx Burlesque competition, which has been running in Australia since 2010 (competition formerly called Miss Burlesque and Mr Boylesque).

A’dora has been the producer of the Mx Burlesque Western Australia competitions since 2012. She is director of Australian Burlesque troupe Sugar Blue Burlesque and has been performing, teaching and producing burlesque shows worldwide since 2007. She was an associate producer for the FRINGE WORLD Festival in Perth in 2011 and 2012,  the co-creator of the annual Perth International Burlesque Festival, which began in 2011, as well as the co-creator and current co-producer of The Apprentease – Burlesque Excellence Awards. 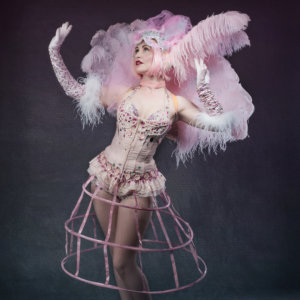 Performing since 2001, Azaria Starfire is a well-known and loved performer on the Irish circuit.

Her journey with Mx Burlesque began in 2012, having competed in the Grand Final in Sydney she took home the titles of Miss Burlesque Adelaide & Miss Fantastic, and a desire to share her experience with the Irish burlesque community.

Azaria has choreographed and created shows for several Irish festivals, including Castlepalooza, Gateways Festival, & Electric Picnic & Canal Quarter Festival. She is currently curating The Climate Change Cabaret, which will hit The Sugar Club stage in September 2022.